IMCORP is the leading provider of power cable reliability assessment services for medium and high voltage power cable systems of new cable installations and aged cable assets. We assess shielded power cable and accessories from 5kV to 500kV. In our more than 19 years in business, we have assessed over 140 million feet of cable systems across 4 continents. Our goal is to partner with our clients, achieve the maximum reliability attainable at the lowest total cost. Our assessment is non-destructive, requires no hazardous materials, and is a cost effective alternative to cable replacement.

OVERVIEW
›This case study is the summation of a project undertaken by CenterPoint Energy that received the Industry Excellence Award in the distribution category at the 2016 Southeastern Electric Exchange conference. This study focuses on how CenterPoint utilized a 2009 FERC order (FERC Docket No. AC09-27-000, March 9, 2009) stating that US electric utility companies may use capital funds for cable assessment using IMCORP’s Factory Grade® technology. CenterPoint followed this ruling as part of a de? ned rehabilitation and certi? cation program to signi? cantly extend the life and improve the reliability of their aged underground cable population.

RESULTS
› After comprehensive assessment of each aged cable system in CenterPoint’s target population using IMCORP’s Factory Grade® technology it was found that 72% were performing to manufacturers’ standards, needing no in ground rehabilitation. The remaining 28% of these cable systems required some on-site mitigation or span replacement to return the cables and terminations to manufacturers’ performance speci? cations. The 28% substandard population was found manifest in 99.6% of loops originally targeted for replacement. Armed with IMCORP’s comprehensive foot-by-foot condition pro? le of each component within the whole loop, CenterPoint crews were able to perform proactive targeted rehabilitation on only those components found to be substandard. The results have shown a 65% reduction in capital costs originally earmarked for loop rehabilitation and a 98% reduction in outages, saving CenterPoint millions of dollars in wholesale cable replacement and avoided fault repair costs. This proactive approach to asset management won CenterPoint the Industry Excellence Award for Distribution at the 2016 Southeastern Electric Exchange conference.

Background
CenterPoint Energy, Inc. (CNP), headquartered in Houston, Texas, was plagued by outages caused by their aging underground cable system infrastructure. The company has more than 18,000 underground loops totaling 13,000 miles, where 27% of loops were comprised of cables at least 35 years old; it was these loops that cause 44% of the total system failures. CenterPoint initially took a run-to-failure approach to solving this problem, replacing an average of 35 loops annually. These annual replacements were based on loop age and historical failure rate. Under this approach, it was estimated that the time frame to replace the 35+ year aged loop population would have taken more than 100 years to complete. In July of 2013, CenterPoint’s asset management team began to develop a proactive and sustainable solution by introducing IMCORP’s Factory Grade® technology to assess, rehabilitate and certify this infrastructure
as a viable and cost effective alternative to replacement, following the 2009 FERC order docket AC09-27-000. The Factory Grade® assessment enabled CenterPoint to obtain a foot by foot condition pro? le of each cable system, enabling technicians to pinpoint speci? c defects in cable system spans. Most above ground termination mitigations were preformed on-site, during assessment, as technicians would receive immediate feedback during the rehabilitation process, improving the inef? ciency of costly follow up work. Using IMCORP’s innovated technology, CenterPoint was able to rehabilitate aged underground loops and certify them to like new condition, guaranteeing them for an additional 15-20 years. This proactive program led to a 65% reduction in loop rehabilitation costs, and 98% reduction in loop outages. 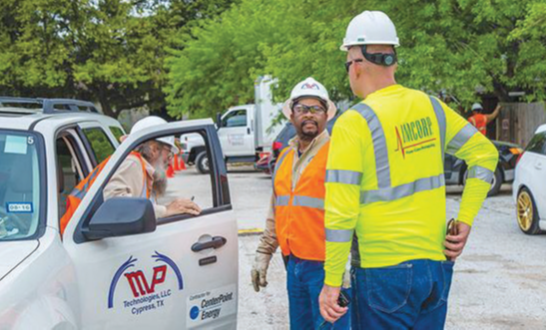 Teams of technicians work together to perform an IMCORP Factory Grade® assessment and complete any on-site mitigations.

A Typical Underground Loop on CenterPoint’s Target System
CenterPoint’s recent utility rehabilitation program found 99.6% of the loops assessed required on-site mitigation or span replacement in order to rehabilitate the loop to meet manufacturer speci? cations. Since each loop is only as reliable as the sum of all the segments and components it is comprised of, it is generally recommended that the loop be considered in aggregate for the purpose of plant betterment and reliability improvement. Accounting for each loop as a whole, instead of on a span by span basis, is recommended for capitalization purposes. 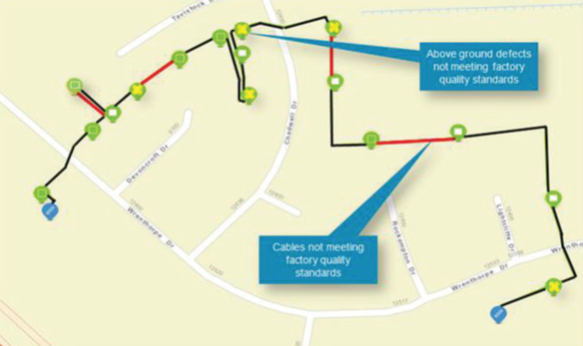 Results
By utilizing IMCORP’s Factory Grade® technology, CenterPoint has experienced major drops in system wide failures. In addition, the utility has reported 72% of their aged underground cable systems did not require in ground rehabilitation resulting in a 65% reduction in loop rehabilitation costs, saving hundreds of millions of dollars in capital costs when compared to wholesale replacement. After assessing more than 1,000 loops, averaging 16 cable spans each and performing more than 15,000 mitigations, CNP has recorded unprecedented and award winning results. The cost to assess and restore a URD loop to like-new performance has been 65% less than the cost to completely replace it, a situation that bene? ts shareholders and customers alike. IMCORP’s Factory Grade® assessment is the proven technology that boosts reliability, reduces costs, and improves capital reach for utilities throughout the world. 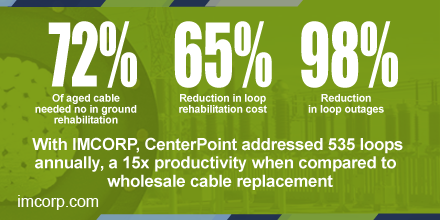 In Summary:
Encountering a rising number of system outages and growing concerns about their aging underground infrastructure, CenterPoint Energy decided to take a practical approach to their reliability problem. The solution comprised of many parts, including a proactive customer-centric approach, based on a sustainable system for providing improved electric delivery reliability, lower operational costs and a more ef? cient asset management program. In 2013, CenterPoint’s electric distribution services team chose a comprehensive rehabilitation program based on IMCORP’s Factory Grade® technology solution and followed the 2009 FERC ruling, AC09-27-000, allowing US electric utilities the ability to capitalize funds used for cable assessment, certi? cation and rehabilitation. Since implementing the program in 2013, CenterPoint has seen impressive results, not only in improved reliability, but also in establishing a way to steadily reduce the backlog of aging underground electric infrastructure.